Announcing the Winning Proposal for the Collett’s Corner Design Competition 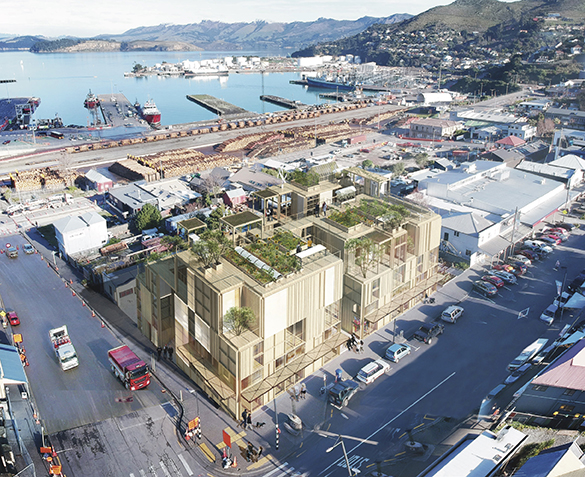 On September 6th three architecture teams presented designs for the future of Collett’s Corner, a prominent site in Lyttelton. They shared in common the purpose to rebuild the heart of Lyttelton by creating a special place to gather with friends old and new. They were the selected finalists from 31 entries, the essence of the evening was captured in this short video:

The jury had the challenging job of agreeing the winning scheme. The outstanding quality of the entries made for a tough decision. All of the final entries demonstrate the possibility for creating inviting places to gather which is at the core of building meaningful relationships and community. Oto Group was recognised for its strong concept to use kai as the way to bring people together. AHHA were recognised for their materiality and attention to place making through participatory design. While in:flux was commended for creating a building that had a strong presence as well as granular scale. First place receives $10,000, and the second and third place each receive $5,000.

The winning scheme is The Hive by in:flux.

The Hive, designed to create a bustling addition to Lyttelton’s creative chaos, was selected for its thoughtful relationship to the context, carefully curated arrangement of the functions and the clever use of scale and proportion. The laneways and central courtyard provide intimate public spaces as well as respond to the future plan for Lyttelton. The spatial arrangements allow for future development with business owners, while also providing desirable amenities such as the rooftop garden, the ‘flux space’ open for mixed programming on the ground floor, and the community information space. The scale of the building as a whole is a prominent marker of the the corner site, and compliments the school across the street as well as a creates a bookend to the commercial core. The scale of the building is broken down to relate to the surroundings through its modular design. The design of the inside and outside spaces correspond with each other creating a sort of luring invitation to come inside and hang out.

In:flux is a Christchurch collective of four creatives and friends who work in the field of architecture in various award winning local practices. The group was formed in 2015 as a response to a need for quality community projects that benefit a wider audience in a city of change. From different backgrounds and having a wealth of experience, they came together in Christchurch. Sebastien Gapinski and Frederic Gapinski, originally from France, have qualifications not only in architecture, but also Heritage and Urban Design respectively, and are passionate about design and art. Maria Chen grew up in Christchurch, has worked in New York, and has been involved in transitory and community projects since the earthquakes. Paul Anselmi, originally from Melbourne, has worked in Beijing, Japan and Melbourne, is based in a Lyttelton studio, a place which he is passionate about. In:flux will deliver the project in collaboration with one of the team member’s Christchurch based offices.

For more information about The Hive submission see their complete submission here:
> A3 Posters
> A4 Summary Document

The jury used the following evaluation criteria to determine the selected team:

Collett’s Corner is a 2,300m2 mixed-use building in the heart of Lyttelton. The development includes guest accommodation, collaborative workspaces, cinemas, bar, restaurant and hot baths. Camia Young, the project steward for Collett’s Corner, says ‘we are challenging conventions of property development by creating a building that builds community, people have a say in what uses it has, what it looks like and ultimately they can own part of it.”

Ohu is pioneering a new way of doing property development by working with communities to create collectively owned buildings. Collett’s Corner will launch an equity crowdfunding campaign in February 2019, opening up the opportunity for people to own a share in Collett’s Corner.

All Image credits to in:flux
Contact Camia Young for any questions camia@ohu.nz or 021 1125 087